All About Adelphi – our derivatives and origins   Next Article >   < Previous Article

All About Adelphi – our derivatives and origins

Adelphi is the Greek word for ‘brothers’. Our name came from the three Adam brothers, two of whom were famous architects and the third the entrepreneur, who together designed and built the original Adelphi building in the Strand.

The Adelphi logo: The symbol of a cylinder inscribed over the sphere it contains was requested to be engraved on his tomb by Archimedes. To him, it commemorated the fact that he had discovered the relationship between volume and surface area in spheres and cylinders.  To Adelphi it symbolises the classical references of our name and the precision with which our machinery is designed and manufactured. In addition it demonstrates our dealings in vessels and containers of all kinds, and the classical lines symbolise cleanliness and accuracy in the wide ranging industries which we serve.

The Adelphi complex is made up of three buildings, each with a special significance to the firm.

Strand House takes its name from the building in the Strand where Adelphi was founded, near to Charing Cross station. In those days the river came right up to the building in Adam street and had vaulted lower rooms (Fig.1).

The Friary takes its name from the Friary Meux brewery in Guildford (Fig.2), founded by our Chairman Stephen Holroyd’s great grandfather. The site of the old brewery is now a shopping mall called The Friary.

The Sheldonian is a famous Classical style building in the middle of Oxford surrounded by a circle of Ancient Greek style monuments. Stephen Holroyd was at school in Oxford and knew it well, and felt the style corresponded with the Adelphi values, as well as continuing with our Greek links.

Olympus House – the name of the overall site – Mount Olympus is the mythological home of the ancient Greek gods, and the name again was designed to reflect the established Greek ties. A number of Adelphi’s machine names have their origins in mythology, such as Vesta tube sealers and Cerberus tube fillers.

The two other buildings on the site are also interesting in regards to the history of the local area.

Blacksmiths was the original Blacksmith’s building for the Haywards Heath town gas company.

Finch’s Yard was Jesse Finch’s builder’s yard and sheds. Jesse Finch was one of the first businesses in Haywards Heath, which only started when the railway came in the 1850s. He was a builder and builder’s merchant, and also an undertaker and coffin maker – in the shed wall nearest the brick building you can still see an oblong wooded slot through which they discretely slid the coffins onto horse drawn carriages. Jesse later built new sheds as his business expanded to where the Waitrose site is now. Jesse probably built all the houses in Mill Green Road and the surrounding roads. The clay for the bricks was dug out next door where Sunninghill are. 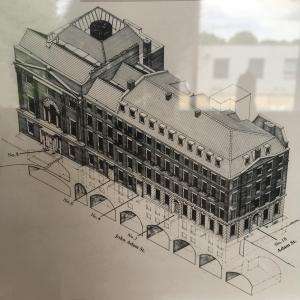 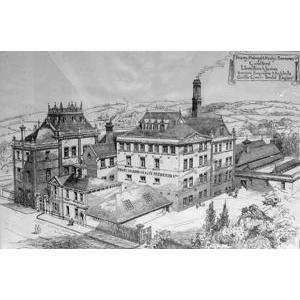